This story all started when they met on Shakedown swinging art from their VW vans in the parking lot of a Grateful Dead show in 1993! The long strange trip continues....

Scramble and Richard Biffle reunited to collaborate for 2 nights at Red Rocks for these unique studio / live combined efforts celebrating the spirit of The Grateful Dead with Dead & Company. A limited series of only 11 embellished canvas prints signed by both artists are available for each painting.

Both Artists came together. Scramble with his own ideas and Biffle adding to it and surrounding it. They worked out their ideas on paper and then drew it onto the canvas this time. First Richard took the canvas to his studio and started his part of the painting, He added his iconic Grateful Dead imagery, symbols everyone recognizes and loves. Leaving half of the canvas blank for Scramble to paint live at Red Rocks during night one of Dead & Company. When Scramble got to his paint station at Red Rock, he unveiled it as the music started. It was a new approach for him to paint on someone else’s canvas. What he did was a nice addition and compliment to Richards work. Adding the live music element to the studio painting is like creating the album cover for the concert that night. 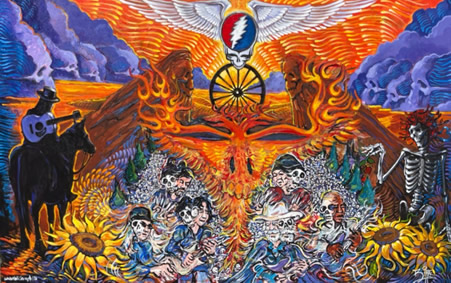 Night two was going to be another hybrid like the night before. The artists met that afternoon before the show to discuss the vision for the night's piece. This one was worked out on paper and then drawn onto the canvas.

This time, Scramble would paint live at the show before he gave it to Richard to complete to complete their masterpiece in the studio. 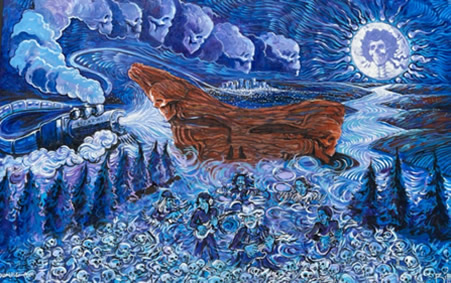 Richard Biffle: A prolific painter who has created prominent designs for the Grateful Dead, Carlos Santana, The Doobie Brothers, Black Crowes, Widespread Panic & many other bands on the sam Jam Band Scene. 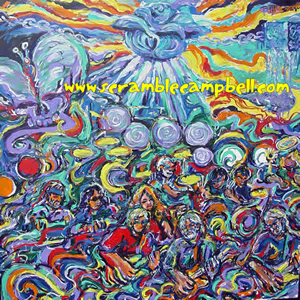 2003 The Dead - Bonnaroo
Ten years later, their pallets collide in 2003 at Bonnaroo. Both had graduated from the lot and now had a booth inside the artist village at the Festival. Scramble had a plan this time. He wanted to ask Richard to paint with him later that day. So, they did. Scramble brought a 4x4 ft canvas, his easel and all of the paint onto the middle of the field to set up the En Plein Air studio before The Dead got to the stage. Richard Biffle emerged, weaving in and out of tie dyes, paint brushes in hand, he somehow had found the paint station.

There was no real plan, they had no sketch, It was just a blank canvas in a sea of Dead Heads. That is, until the music started. The band started playing & the blank canvas came to life with the energy of the show. The live music experience was seeping into the painting. So was the grit and determination of these two artist to complete this mission. As it got dark, it seemed like there were twice as many people around as they went at that giant canvas. 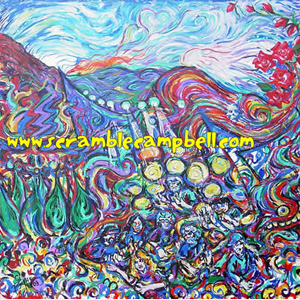 2003 - Red Rocks - "Dead Rocks""
They were like Art Gladiators with headlamps. What they painted that night was a unique portrayal of the LIVE concert event. Scramble painted the band as Biffle laid out the songs as they played.

See if you can identify any of them.---

They painted another piece on July 6 at Red Rocks for The Dead later that same year.

It would be several years before their brushes mingle again. It was 2017, both artist were living in Colorado now. 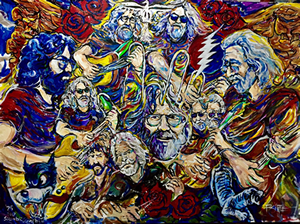 2017 - Happy 75th Jerry
It was Jerry Garcias 75th Birthday Celebration when Bobby Weir was playing with the Colorado Symphony Orchestra. They knew that this would be the first time Jerry Garcias guitars Wolf & Tiger were going to be played at the same time. This inspired a new style for them as they created another masterpiece to document this special occasion live at Red Rocks Amphitheatre

Over the years the two artist have painted together a handful of times. So far this year, the two have painted together four times. It began with Scramble inviting Richard to paint with him this year at Billy and the Kids. They had an idea that they sketched out, that later would turn out to be a new way for them to collaborate. Scramble invited Richard to paint live at Red Rocks. It was a cold windy night and the canvas was whipping back and forth from the sharp gust. We had the easel tied down and a spotter to hold the canvas so they could paint in the crazy conditions. Richard asked what we do when it gets to be so windy and Scramble said, we paint…. So, they did. 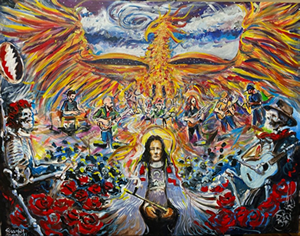 2021- Billy and the Kids
Having the idea sketched out before the show, was a new way of approaching the old style of painting together. They both knew what they were going to do on this canvas, so they got focused and the music flowed thru them onto the masterpiece. After the show, they both wanted to add a few different elements, so they tightened up the details in the studio.

Their next painting was sometime during August 1-9 for The Days Between. 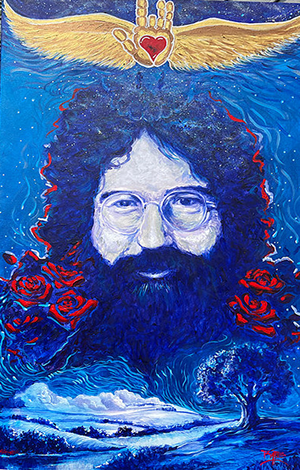 2021 - Studio - "Promised Land"
They met in the studio this time for a different approach. Painting in a climate controlled environment and listening to the music as they painted They bounced ideas off of each other and communicated as they created this one. A different dynamic that painting live at Red Rocks or in the middle of Bonnaroo.

Fast forward to the next version of this collaboration. The series is once again evolving and it appears to be a new hybrid. A live painting, studio collaboration. 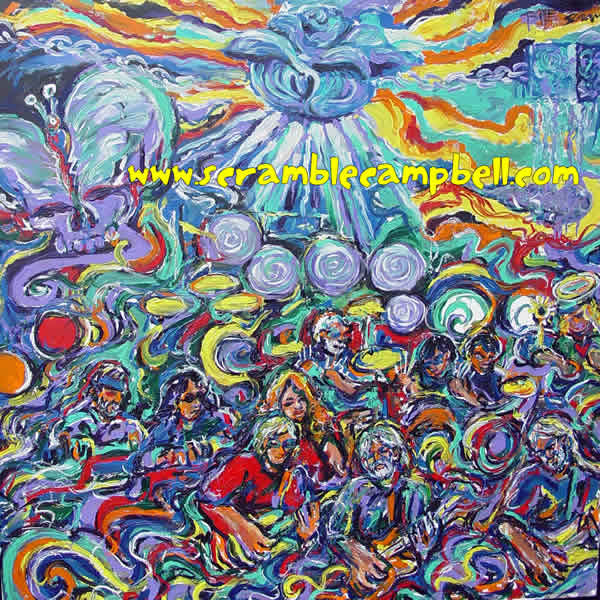 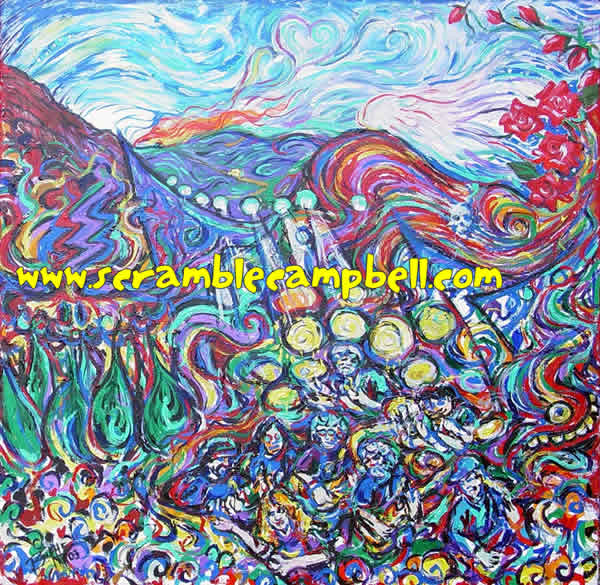 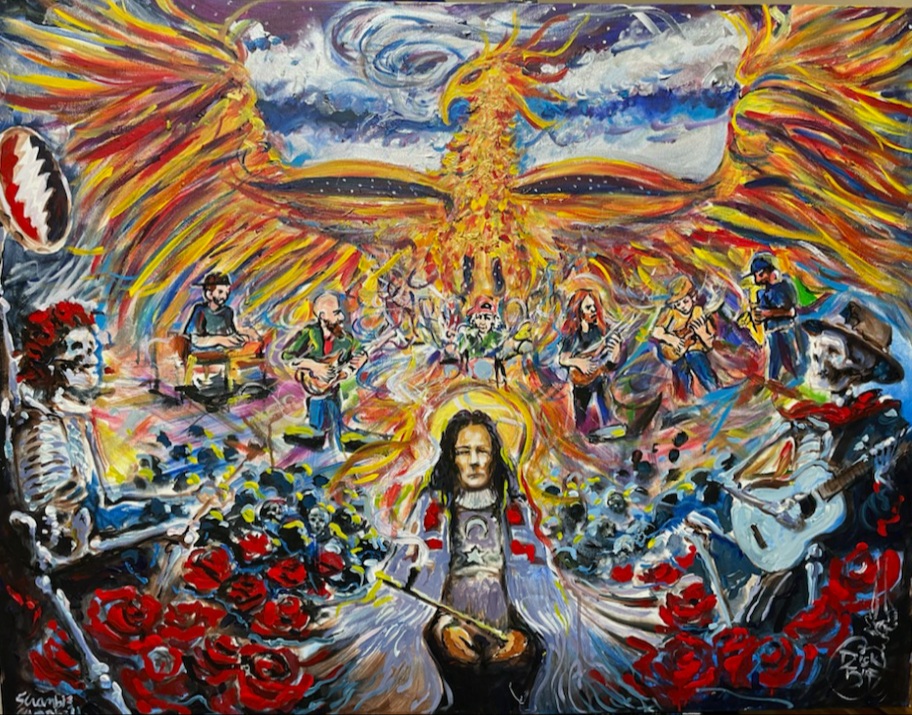 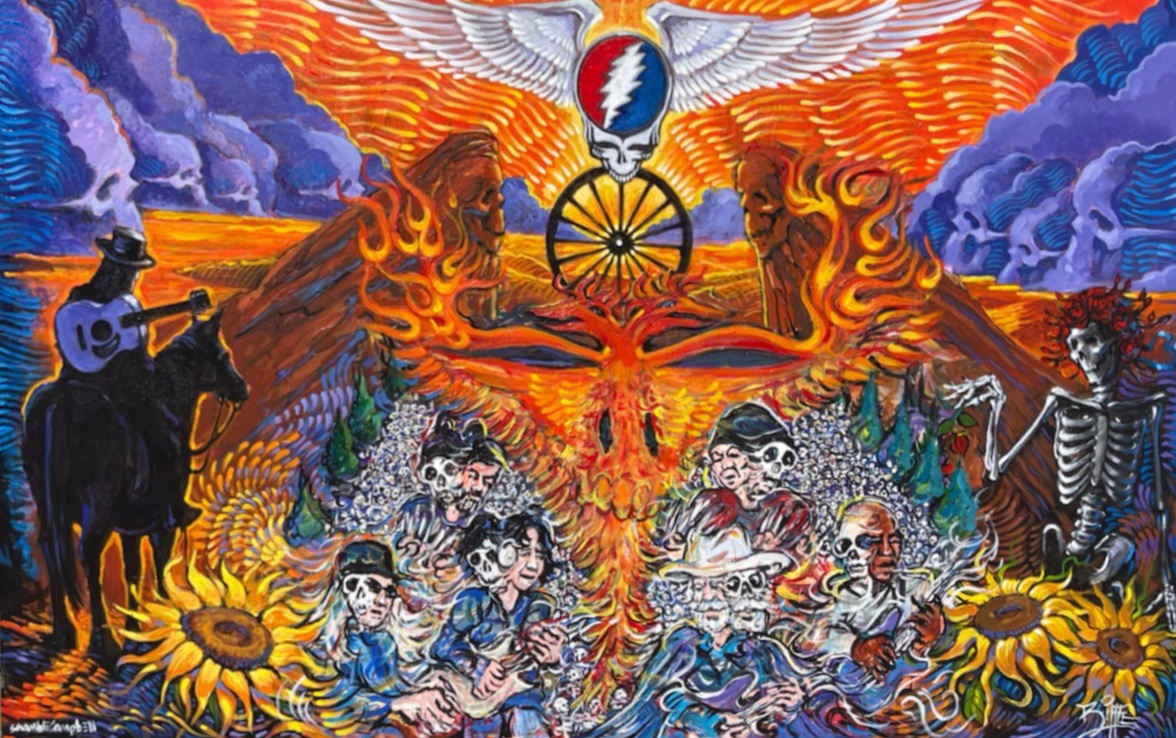 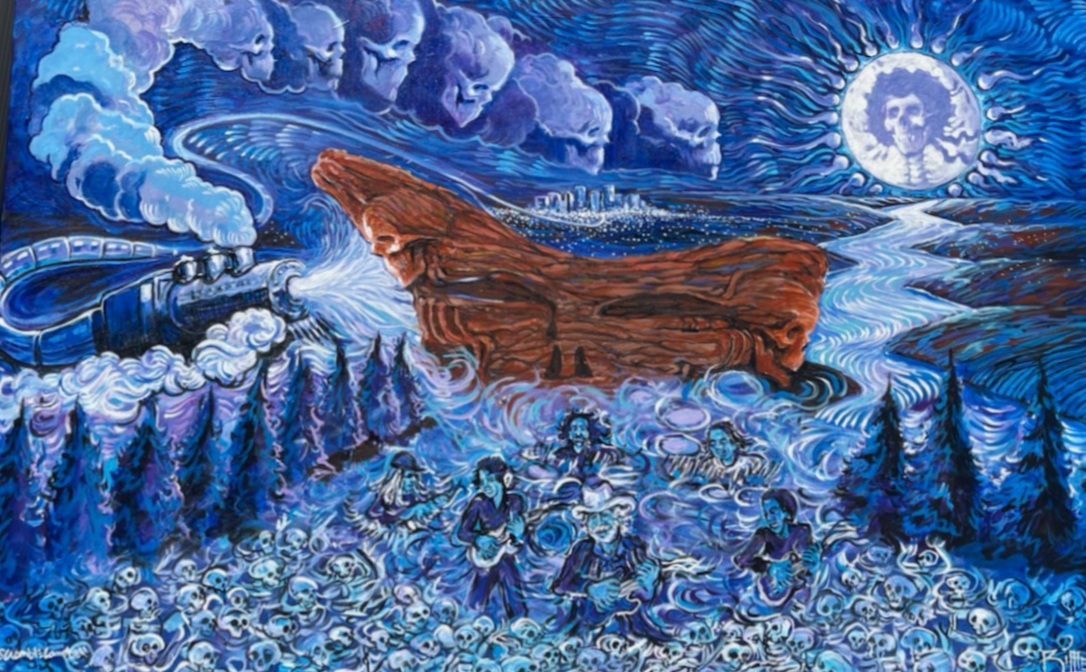